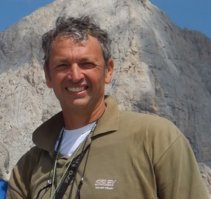 He has been recently appointed as Chair in Geology at SEAES (University of Manchester) and is also Associate Researcher at the Istituto Nazionale di Geofisica e Vulcanologia (INGV, Rome). He has 15 years’ experience in seismic-related fault processes and published 70 peer-reviewed papers and co-edited three special volumes on this topic. In collaboration with geologists, geophysicists and engineers, he integrated field data from exhumed seismogenic faults with experimental observations to understand the physico-chemical processes active during the seismic cycle. The scientific and technological results of this collaboration include the investigation of several fault weakening processes that may operate during earthquakes and the development and installation of SHIVA, currently the most powerful rotary shear installed worldwide. His research activities were also supported by two European Research Council Grants (USEMS & NOFEAR, 2008-2019, 4 M€). He received the International Award for Geology from the Accademia dei Lincei (Italy, 2010), the Arne Richter Award of the European Geoscience Union (Vienna, 2008) and he is member of the Academia Europeae (from 2013) and Accademia Galileiana (from 2014).

With an average toll of 80.000 deaths per year over the last decade, earthquakes remain one of the most dreadful geohazards. Here, by looking at the scars of ancient earthquakes frozen in the rock and by reproducing in the laboratory the extreme deformation conditions typical of the earthquake source, we will try to decipher how the earthquake engine works.

With an average toll of 80.000 deaths per year over the last decade, earthquakes remain one of the most dreadful geohazards. Seismic waves responsible for shaking originate deep in the Earth’s crust from a rupture propagating along a surface called a fault (the earthquake engine). For this reason, earthquakes are investigated remotely by analyzing the seismic radiation pattern observed at the surface. However, one might argue that inferring earthquake physics through remote seismological approaches is like trying to understand a car’s engine by listening to its noise and without lifting the bonnet. Here we apply possibly more direct observations of the earthquake engine by lifting the bonnet and looking inside faults once active (millions of years ago) at a depth of several kilometers and now exposed at the Earth’s surface. We also make it possible for the ancient engine to work again by performing experiments in the laboratory that reproduce the extreme deformation conditions on a fault during an earthquake. At this stage, fault rocks slide for tens of meters at slip rates of a few meters per second under the load expected below several kilometers of rock. Under these conditions, like skaters slide on the ice thanks to a film of water between the blade and the ice, rocks slide efficiently during earthquakes thanks to a thin lubricating layer of melted rocks or reaction products.
The above methods and results can contribute significantly to applied (industrial) research investigations, including determinations of the strength of faults and fractures in natural reservoirs. Such studies can be calibrated for specific geological structures, including geothermal fields, reservoirs stressed by oil and gas extraction or by the injection of waste liquids, gas and CO2 for storage purposes. Lastly, the above experimental methodology allow us to investigate friction and wear processes of interest for the oil (drill bits, etc.) and car industry (brakes, etc.).